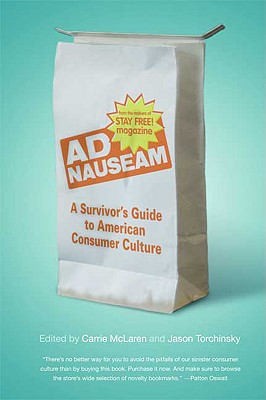 With the style and irreverence of Vice magazine and the critique of the corporatocracy that made Naomi Klein's No Logo a global hit, the cult magazine Stay Free --long considered the Adbusters of the United States--is finally offering a compendium of new and previously published material on the impact of consumer culture on our lives. The book questions, in the broadest sense, what happens to human beings when their brains are constantly assaulted by advertising and corporate messages. Most people assert that advertising is easily ignored and doesn't have any effect on them or their decision making, but Ad Nauseam shows that consumer pop culture does take its toll.

In an engaging, accessible, and graphically appealing style, Carrie McLaren and Jason Torchinsky (as well as contributors such as David Cross, The Onion's Joe Garden, The New York Times's Julie Scelfo, and others) discuss everything from why the TV program CSI affects jury selection, to the methods by which market researchers stalk shoppers, to how advertising strategy is like dog training. The result is an entertaining and eye-opening account of the many ways consumer culture continues to pervade and transform American life.