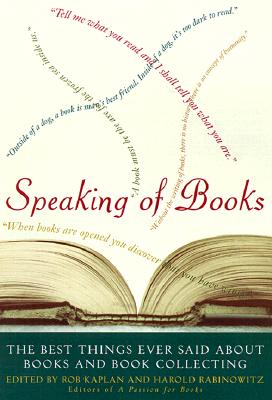 " What really knocks me out is a book that, when you're all done reading it, you wish the author that wrote it was a terrific friend of yours."
-- J. D. Salinger, The Catcher in the Rye (1951)
" I would rather be a poor man in a garret with plenty of books than a king who did not love reading." -- Thomas B. Macaulay, Life (1876)
The love of books, and the desire to speak and write of that love, are as old as books themselves. In fact, they are even older than printed books. " All the glory of the world would be buried in oblivion, unless God had provided mortals with the remedy of books, " wrote Richard de Bury in The Philobiblon (The Love of Books), which was completed in 1345, more than a hundred years before Gutenberg printed his first Bible.
And in every generation since de Bury's there have been new voices expressing the pleasures they take in books and reading. Speaking of Books contains hundreds of the best of those expressions -- entertaining and thought-provoking quotations about the reading and enjoyment of -- not to mention obsession with -- books. The collection includes examples of bibliophilia that range across the centuries and around the globe, from ancient Chinese proverbs to Elizabeth Barrett Browning, from the Bible to Woody Allen, from Jane Austen to Mark Twain, and from William Shakespeare to J. D. Salinger.
Filled with insight, wisdom, and humor, Speaking of Books will be read with pleasure by everyone who believes, as Thomas Carlyle did, that " of the things which man can do or make here below, by far the most momentous, wonderful, and worthy are the things called books."
" I would be mostcontent if my children grew up to be the kind of people who think decorating consists mostly of building enough bookshelves."
-- Anna Quindlen, " Enough Bookshelves, " New York Times, August 7, 1991
" It was books that taught me that the things that torment me most were the very things that connected me with all the people who were alive, or who had ever been alive." -- James Baldwin, in the New York Times, January 1, 1964
" Where is human nature so weak as in the bookstore " -- Henry Ward
Beecher, Star Papers; or, Experiences of Art and Nature (1855)
" What refuge is there for the victim who is oppressed with the feeling that there are a thousand new books he ought to read, while life is only long enough for him to attempt to read a hundred?" -- Oliver Wendell Holmes, Sr., Over the Teacups (1891)
" I took a speed-reading course where you run your finger down the middle of the page and was able to read War and Peace in twenty minutes. It's about Russia." -- Woody Allen, in a letter by Phyllis Mindell to the New York Times, September 3, 1995
" You may perhaps be brought to acknowledge that it is very well worthwhile to be tormented for two or three years of one's life, for the sake of being able to read all the rest of it." -- Jane Austen, Northanger Abbey (1818)
" Book-love, I say again, lasts throughout life, it never flags or fails, but, like beauty itself, is a joy for ever." -- Holbrook Jackson, The Anatomy of Bibliomania (1930)

Title: Speaking of Books: The Best Things Ever Said About Books and Book Collecting